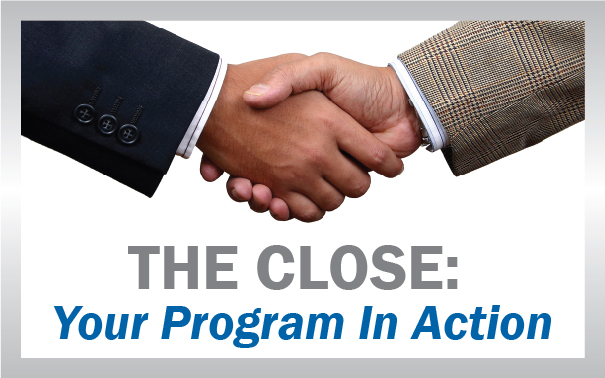 The Close: Your Program in Action

Back in January, 2015, I was conducting training for a dealer in New England. One of the points I emphasize in Sales Training is the tremendous opportunity to add value to the buying proposition by going over the dealer’s customer loyalty program benefits prior to discussing details of the purchase. I point out that you are giving the customer more reasons to say YES to the deal when presented. The training took place in the morning and during the afternoon I observed the sales process to see that the salesperson was taking advantage of the opportunity to introduce additional value.

One of the salesmen who had attended training that morning was with a customer who historically is a very good negotiator and most salesmen shy away from this type. The ad that brought the couple in was for a new vehicle offered at a lost lead price of $13,995.00. I noticed that the salesman was timid about introducing the loyalty program and only casually mentioned it without going into detail. At about 2 hours into closing, the customer was adamant that they would only pay $13,000.00 for the vehicle so they were at an impasse.

The General Sales Manager went in to see if they could get the customer to pay the advertised price. He picked up the Loyalty brochure and after introducing himself, he spent about 5 minutes going over the benefits of their program. He pointed out to the customer that his oil changes, tire rotations, state inspections, car washes and tire repairs would be provided complimentary and if all factory recommended services were done at one of the three dealer’s locations the engine would be guaranteed against catastrophic failure. Additionally, he explained that for every dollar the customer spent in Parts and Service they would receive points that could be used to further reduce the cost of services or used towards the purchase of their next vehicle.

It took the customer about another 10 minutes to think about the deal that was on the table and the additional value of the complimentary services to finally say YES to the price of $13,995.

This example only proves that by implementing the training and taking the time to build value pays off.